This search has really tested me as it involved searching through the records of three countries over a period of two years.
The British War Medal awarded to Engineer Sub-Lieutenant Reginald Frederick Back was originally sent to me by the NSW RSL as part of what we have come to know as the NSW box.
The first bit of information I found was via Ancestry on a WWI medal roll confirming that R. F. Back was entitled to the BWM for service in the Royal Navy Reserve but that was it, no names to go with his initials. I then spent a considerable amount of time searching the records in the UK but there was nothing additional. The second piece of information was that a ships officer by the name of R.F. Back sailed from Lyttleton NZ, to Melbourne so it was in to the New Zealand archives for a look. Based on the initials alone there was nothing of substance for me to focus on. On a hunch I looked at the Australian electoral rolls and found Reginald Frederick Back, Master Mariner, living in Sydney from the 1930s to 1969. Unfortunately, there was little else in the Australian records but enough to confirm that he didn't marry or have children. So it was back to New Zealand.
In the New Zealand WWI archives I stumbled across the service record of Gunner Reginald Frederick Back from Lyttleton, NOK Miss Amy Back sister. The service record made reference to Back being discharged from the NZEF to take up a commission in the Royal Naval Reserve and that his medals were issued by the Admiralty. This link is to his service record which is a pdf file requiring download. I had my man
Through the New Zealand records on Ancestry I could piece together the family tree and what emerged was a fascinating story about this family.
Reginald was the son of Algernon Back who was born in Devon UK. Algernon was a mariner and the Chief Officer aboard the 19th century migrant ship the Euterpe. To my surprise the Euterpe survives as the Star of India and this link has a picture of the ship in 1877 and in more recent years. Interestingly the caption of the 1877 photo mentions London St where Reginald lived before he enlisted.
This link is to the news letter of the Maritime Museum of San Diego which includes a picture of Algernon on page 14. The information about the Euterpe led me to the blog of Joan Curry which has details from several of the ships voyages:
Algernon tangles with a dog.
Algernon plays the violin.
Some time around 1880 Algernon left the Euterpe and settled in New Zealand, however, I think that he might have already established his family at the port and continued to sail for a few years after they began living in London St.
Algernon had a daughter and two other sons and I could follow them pretty easily through the New Zealand records. At one point in time all Reginald's siblings and their respective families lived at the same address as part of the family retail business. Amy didn't marry, one brother did marry but didn't have any children. The last brother married and had two daughters. I couldn't find their marriage details but by knowing there first and second names and cross referencing this against the address I already know I was able to establish their married name. One daughter, in turn, had three children and I've now been in touch with one of them. This is Reginald's great nephew.
The Back family connection with Canterbury NZ, extends beyond Algernon and his family settling there. Algernon's brother Frederick was a railway manager who later became responsible for establishing the railway system around Canterbury. These two links are contemporary news paper accounts of a study tour he did in 1885 and on his retirement.
The returned medal tally is now 1219.

Post updated 31 Dec 12
Thanks to the generosity of Joan Curry I have been provided with a copy of the photo of Algernon Back (identified as Beck) which appeared in the Maritime Museum of San Diego Museum news letter I mentioned in the main post. 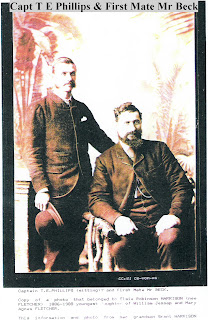 Posted by Lost Medals Australia at 19:39