I was recently asked to do some research on a medal and the story I uncovered is worth retelling.
The medal in question is a Queen's South Africa Medal with the clasps Transvaal, Orange Free State and Cape Colony.  This medal was awarded for service during the Boer War. 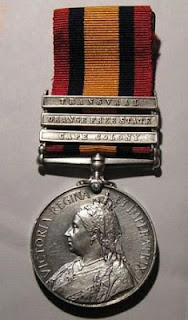 The medal is named to 729 CPL W Oaks Victorian Mounted Rifles. However, it is immediate obvious that the original name has been erased and W. Oaks has been added. The number and unit are untouched. As can be seen in the pictures of the medal the rim is thinner near the W, the font is not the same as the unit name and close inspection shows that the renaming is done by chisel engraving where the rest is impressed. The final tell tale is the remnants of the previous naming to the right of the 'W'. 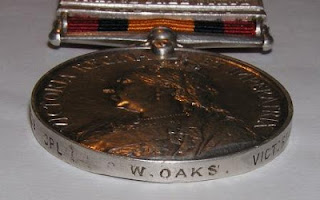 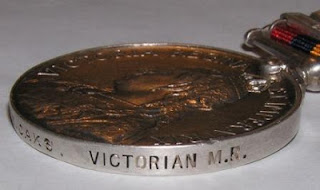 My mate Daryl is a QSA expert but between the two of us we just couldn't find a person by the name of Oaks who served in an Australian contingent to the Boer War. So we reverted to what was known: the number and the unit. This led me to 729 CPL Charles Edward Somerset O'Donnell. I'm convinced that this is the man who was originally awarded the medal. O'Donnell is also mentioned on the Australians in the Boer War data base and his photo appears as part of a contingent montage.

Usually medals are renamed for a number of reason, sometimes to deceive or to replace a medal in a group where the original has been lost. This got me thinking about why O'Donnell had either sold his medal or lost it. If it was sold it might have been due to financial hardship during the Depression which was a common occurrence.
While putting together the story about the O'Donnell the first piece of information I came across was the 1903 death of his sister.

The death notice confirmed O'Donnell's mother's name and it also gave me his father's name. This is where the story really took off.
As I looked at the electoral rolls for Edward O'Donnell, his occupation was listed as either Gentleman or Independent Means. At the time this meant that the individual was wealthy and did need to work. How interesting I thought. If the O'Donnell's were a wealthy family what happened so that Charles might have had to sell his medal?
The next article I found concerned a court case where Frances (Charles' mother) was petitioning for Edward to pay for her financial upkeep while they were estranged. The estrangement was attributed to Charles being violent towards his father and his mother always standing up for Charles.


Edward had enough of Charles and moved out. The article details that the O'Donnell's owned several houses and that Edward was a retired Detective Sergeant. Edward and Frances must have later reconciled as they appear in the electoral rolls together for some years after this case.
The information about Edward's profession then opened up more information. Trove is awash with articles about Edward who was one of the leading Victorian detectives from about 1865 through to the early 1900s. Many of the major crimes in Ballarat and Melbourne from that period were investigated and solved by Edward.
All this previous publicity was inconsequential when compared to what happened on 27  July 1900. 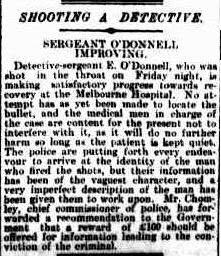 Many more articles followed this initial one and Edward's condition fluctuated over several months. The story unfolded over some time and it transpires that Edward had been led in to an ambush when he was shot. The story came to a conclusion when a career criminal was arrested in Perth in October 1900 and identified as the man responsible for shooting Edward.

From what I could gleam from all these articles, Edward received a handsome pension and a substantial reward which allowed him to have Independent Means. However, it appears that the family fortune, as well as a large amount that Frances inherited, was lost over the years and Charles was left nothing.


Posted by Lost Medals Australia at 14:08