NX121609 Victor Frederick Patterson was from a large extended family. However, he didn't marry and died in 1969. His sister did marry but had no children. His brother Sidney also served in WWI and had three children. I've located one of those children and will be sending the WWII group of four medals back to the family in the near future.
Thanks very much to Jean H for sending these medals to me.
The returned medal tally is now 978. 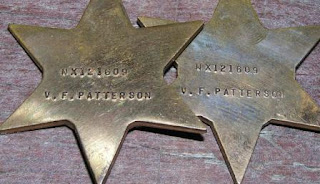 Posted by Lost Medals Australia at 19:09