I've had the 1914/15 Star awarded to J20603 AB John Harold Cresswell RN, for just over 12 months. The initial search went very well as I was provided a copy of his British medal card. Then based on an educated guess I suspected that Cresswell emigrated to Australia and served in WWII as NX13725 Sapper J.H. Cresswell. The date of birth is earlier by ten years but this doesn't surprise me. After this promising start I ran in to the research brick wall, again.
Our new team member, Alex, had a look at this one and today put me in contact with Cresswell's grand daughter Lyn. She was able to confirm what we suspected. After service in WWI, when he had a ship sunk from under him, Cresswell emigrated to Australia in 1927. He did change his date of birth to 1906 so that he could serve during WWII. Sadly John was killed in a motorcycle accident in 1951.
Cresswell would have received three medals for WWI and since he was discharged in 1942 during WWII, he probably would have been entitled to at least another three or maybe five if he served overseas. Where the other medals are is anyone's guess. Even though the pictured medal has some marks on the reverse there is evidence of Braso on the obverse. This suggests to me that someone has looked after this medal in the past.
Thank you to Victor A for sending this medal to me and well done Alex.
The returned medal tally is now 997. 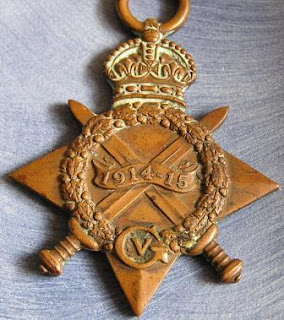 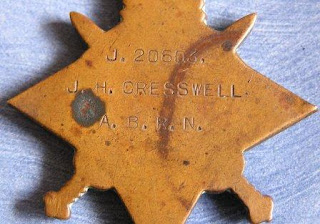 Posted by Lost Medals Australia at 14:50