I've had an Imperial Service Medal awarded to Mrs Evelyn Bessie Spradbery for some time. Finding her family has evaded us, so Morris recently obtained her death certificate. What we know is she died on 28 Jul 91 at the Kendal Green Hospital, Kendal. Her husband's name was Reginald John Spradbery and they lived at 74 Hall Park, Burneside, Kendal, Cumbria, UK. Reginald died in 1996.
I'm hopeful that by putting all these details together in one post we might eventually get a hit from someone who is doing some research on this family. 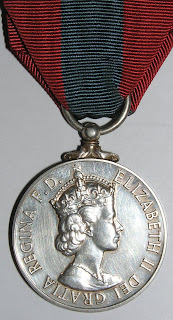 Posted by Lost Medals Australia at 14:41