Leslie John Mannix enlisted on two occasions during WWI. Once again the Australian Surname Group provided the leads that Bill followed to resolve this search and here is the story.
'Leslie John MANNIX had an eventful Service life, sent home from France and discharged because of Chronic Trench Foot, he would later re-enlist in the Home Defence Guard.
He was one of four brothers who served during WW1, it would have been five brothers except that an older brother Arthur Byron MANNIX, blew the whistle on their youngest brother John Robert Septimus MANNIX, for enlisting while under age. The Sydney Morning Herald of Tuesday 9th May 1916 actually published a set of photos of the four brothers. Leslie's grand daughter Lynette, who has accepted guardianship of Leslie's British War Medal, still remembers the stories her mother, Leslie's daughter Mavis who was 12 when her father died, would tell her of her grandfather and his difficulty in trying to walk. Leslie MANNIX was 36 when he died of complications due to his war service. '
The returned medal tally is now 814. These medals are from the NSW RSL box.

Update on 8 May 11 - photos added.
This medal has had a very hard life. 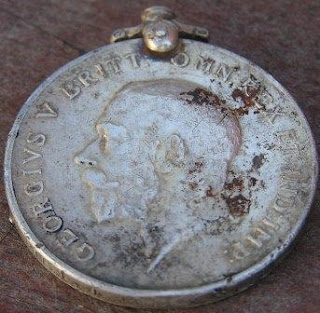 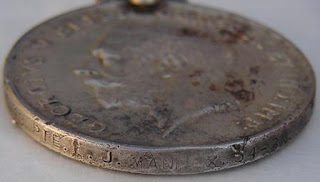 Posted by Lost Medals Australia at 02:53