If anything makes the returning of medals unique it is not so much there return, but the manner in which they were found. In the case of the medals of Stoker John Reuben Owen, the medals stolen during a burglary were found on top of a rubbish tin by Council workers several years ago. After many attempts to locate the owner or his family, the medals were passed into the care of Merv Hampson the President of the Mortlake Sub-Branch of the RSL. Merv's wife Vera, knowing of our work on behalf of the RSL, contacted Bill and asked for help.
Finally after many dead ends and red herrings we were successful in returning John's medals to his son, Trevor. Trevor informed us that the family have been looking for the medals ever since they were stolen 21 years ago.
The returned medal tally is 807. 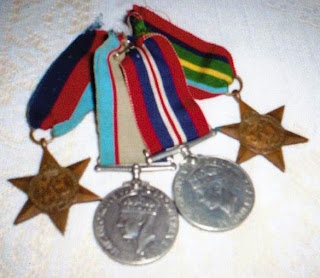 Posted by Lost Medals Australia at 02:28