The search for 5088 John James Isaac Page really started with the search for his brother, Edward. I think it best that the story be told in Bill own words on the Australian Surname Group:
'The search for next of kin for Edward PAGE ended this evening when I spoke to his great-great niece Kay. I know that following Edward's family has not been easy for those of you who have provided the information that I have been tracking down. It seems to be a characteristic of some family lines that they just peter out. In many ways this is what has happened to the PAGE family.
Normally our searches start with the medal, and nothing else, but here it was slightly different, all the medals and the Commemorative Plaque went to a brother (Edward) of the deceased. So I though it would be easier for the Forum to follow through on one person, who we knew to be married, and who I expected would have started a family line. Oh was I mistaken.
So whose medal did I have?
The 1914-1915 Star of John Joseph Isaac PAGE, who was KIA on the 12th October 1917, the first day of the Battle of Passchendaele, however like many of those lost, he would not be declared dead until the 16 May 1918. His brother would receive John's medals and Plaque on the 19th March 1923. Why the delay, well in part because of the chaos of the battle, where many of the dead were never recovered, and whose names adorn the Menin Gate Wall, and partly because nominated both his brother Edward, and his sister Frances as his next of kin, leaving his assets to both.'
This return is a real milestone for Lost Medals Australia as it is the 800th medal we have returned. 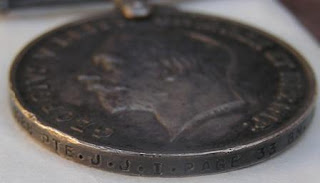 Posted by Lost Medals Australia at 01:40