Some of the searches we do are a story in their own right and are worth telling. The subject of this search is the Australian Service Medal awarded to NX120899 Robert Gardner Peck.
One of the resources we use to find someone is the Ryerson Index. While this is not a complete list it does provide some great hints. What Bill found was a reference to the wake of Bob's wife, Heather. Bill rung the hotel hoping to get a further clue that would lead to the family. You can imaging his surprise when the hotel manager said that he not only remembered that particular night but that Bob was still alive and a regular at the hotel.
Bill left a message and sure enough Bob, now 91, rung. It took a little for Bob to work out what medal was missing but it was finally discovered that the ASM in his group was not engraved and from the description is a copy.
At some point the original has been lost and eventually found its way to the RSL and then us.
The medal returned tally is now 818. 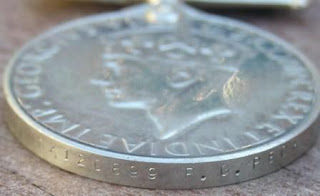 Posted by Lost Medals Australia at 02:39