The story of NX169917 Alfred Archibald Williscroft ended a bit more unexpectedly that we anticipated. Alfred was an infantry soldier who survived three years of war. On his return to Australia... well this is what Bill told me:
'This is one of those stories, you find hard to believe, and yet as we both know are all to often true. The story from the family is that Alf had boarded his ship to come home, it was while another soldier was cleaning his rifle, a shot was accidentally discharged, the round striking Alf, seriously wounding him, he died several days later from complications.'
Once again the Yuku team helped us out, thank you.
The returned medal tally is now 822 and these are from the NSW RSL box. 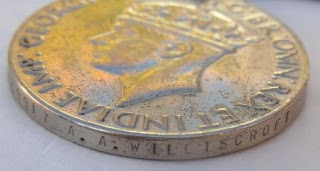 Posted by Lost Medals Australia at 02:35