This is turning in to a bit of a Royal Australian Navy week.

This group of four WWII medals were definitely awarded as part of the first batch following the end of the war. They are quite different in the naming style to those awarded to Will Prior which I posted about recently.

The group was awarded to S3771 James (Jim) William Farrell. The stars are unnamed as normal for RAN awards at the time and the medals are named with heavy impressing and a full stop between the letter and digits of the service number. From the service number, I knew that Farrell's home port was Sydney but his period of service was very confusing. His service records consists of four pages which was a bit of a surprise. He initially enlisted for a 12 year period in 1924 but finished his service in 1927. He re-enlisted in 1940 for WWII and was discharged in 1942. The reason for the unexpectedly short period of service in the 1920s was due to Jim being declared a deserter. I found this notice in the NSW Police Gazette.

I couldn't find out the reason for him deserting or any legal action that was taken against him. All must have been forgiven in 1940 when he enlisted again. Jim was married to Helena but there is no evidence that they had children. For quite some time Jim lived in a set of terraces in Blacktown with his siblings as neighbours. The terraces are long gone having been replaced by shops.

Jim died in 1958. With no direct descendent I started looking at his siblings. His sister Veronica, known as Vera, married James French. From their headstones I worked out the names of their children.

Know these names and finding their contact details are two completely different things. I did find this family on a Ancestry family tree. The tree is owned by Erin, who told me 'Graham's youngest daughter is married to my cousin'. Erin also provided the one clue which led me straight to Graham. Erin was able to tell me which town Graham lives in. I found a G France in that town in the White Pages so I called the number and sure enough I had the right family.
I originally received these medals from Crystal 'Cricket' McK who told me that the medals were found in her late parent's possessions and may have been bought at an auction. Thank you to Erin who was able to provide me with the key piece of information which put me in touch with Jim's nephew. The returned medal tally is now 2672. 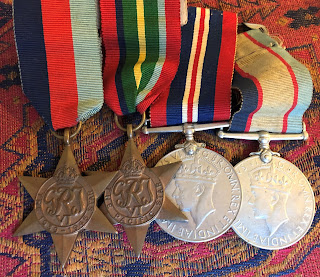 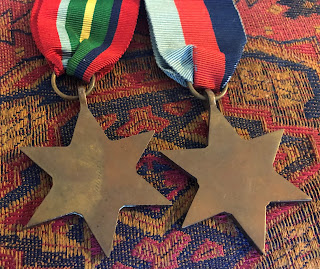