I recently received an Anniversary of National Service 1951-1972 Medal awarded to 3800688 Graham John Dyson. Graham was reasonably easy to track until 2017 when he sadly died. After that the trail went very cold.

I did find that Graham was a champion shot and member of the Australian Match Rifle Association. I found a obituary for Graham in the Association news letter (page 6).  It was thanks to Philip B from this group who was able to connect me with Graham's family.

The returned medal tally is now 2655. 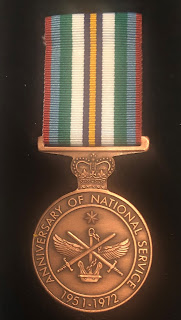 Posted by Lost Medals Australia at 13:07