This WWII group consisting of the 1939-45 Star, the Africa Star, the Pacific Star, the Defence Medal, the War Medal and the Australian Service Medal 1939-45 came to me via the Directorate of Honours and Awards. The group was awarded to QX4841 William Smith Stephenson.

I followed Bill through Trove newspaper articles rather than official records. The key to working out his family tree was a notice following Bill's death in August 1981. No children were mentioned in the notice but it did give the name of his brother in law. Through some reverse engineering of the NSW BDM records and electoral rolls I worked out the name of Bill's nephew. This is David who I just had a fascinating conversation with. David is an expert in philately and we eventually got on to the subject of the Australian Forces Post Office. Those who know me understand that mail was the subject that absorbed most of my time and effort during INTREFT.

Once again it was a pleasure to assist the Directorate of Honours and Awards. The returned medal tally is now 2648. 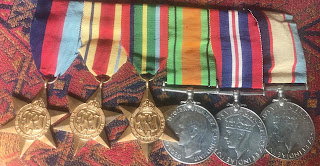 Posted by Lost Medals Australia at 12:07