I often reflect on the randomness of how medals end up with me when their journey started on the other side of the world.

This WWI British War Medal was awarded to 1918 Private J W Clarke, West Yorkshire Regiment. Based on the unit I knew he was a British soldier. However, it took a while to narrow down this soldier's full name. Using the regimental number of 1918 didn't result in any search success. I do know that as the size of the British Army grew as the war progressed, units changed their numbering systems to allow for the addition of battalions to regimental organisations, death rates and movement of individuals. It is not uncommon to see a soldier with several regimental numbers.

The primary source to check these regimental numbers and medal entitlement are the British Army medal cards which are held in the British National Archives. These cards are accessed via the NA website on a pay per access basis or through a third party like Ancestry. The search parameters I had to work with was this soldier's initials and surname. It turned out that there were several dozen soldiers with the name J W Clarke so I went through every card individually. These cards were all filled out by hand but I eventually found the correct card with the number 1918 written on it. This card also noted another regimental number which was 240361. From there I was able to determine that J W Clarke was killed in action on 1 March 1918. However, I still didn't know what the initials J W stood for.

It took a bit of reverse engineering research that started with the date of death that finally led me to work out that J W stood for John Willie. That was the clue that led me from Bradford, Yorkshire to Port Lincoln, South Australia. John and his wife Lena had a son in 1916. This was Herbert Clarke. I followed Herbert through immigration, electoral and death records. When Herbert moved to South Australia he obviously had his father's medals with him. That answered the question of how the medal travelled from Bradford to Port Lincoln. The final pieces of information about Herbert came from his headstone. 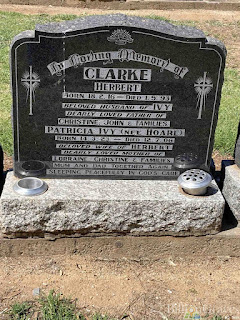 This led me back to Ancestry and I found Herbert on a tree owned by Deidre S. I fired off messages and emails and yesterday Deidre called to confirm all this research. How the medal left the Clarke family and ended up with Johny who sent me the medal renmains a mystery.

The returned medal tally is now 2649. 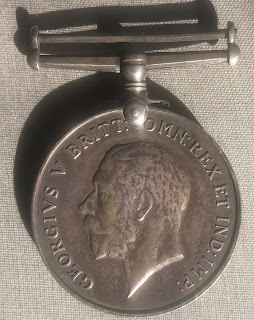 Posted by Lost Medals Australia at 10:24