This is a medal that I've not handled before. It is the India General Service Medal (1936) with the clasp North West Frontier 1936-37. It has been interesting to do some research on this medal and also that is was awarded to a Corporal in the RAF.

The medal was awarded to 513357 CPL MK Mills. Initially I had some concerns about finding what this person's full name was, however this proved rather easy. Our man was Mitchel Kinnaird Mills. Armed with this rather unusual name combination I soon found Mitchell on an Ancestry tree owned by Tony who also shares the same middle name of Kinnaird.

Tony did some additional research and provided me the following information:

The medal was originally sent to me by Joy and Allan H but how it got to Australia since Mitchell died in the UK is a mystery.

The returned medal tally is now 2637. 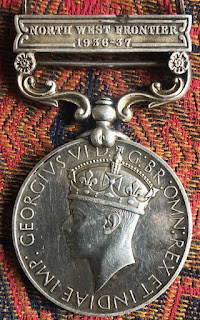 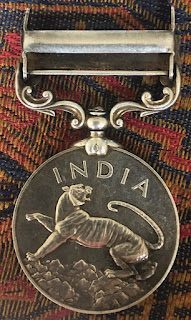 Update 19 Sep 21
I have just received this great message and photo from the family of MK Mills:
This is my Mam, Lesley from the U.K. who received her fathers medal on the 16th Sept. To say we are chuffed to have this back home in the family is an understatement, as we thought it was gone forever.Several medals were passed on down to Mitchell’s son (Mitchell Junior). MK Mills jnr lived in Aus from the 70’s and visited his mum Nancy in North of England in the mid 90’s. This is how it ended up in Aus when he took it back home after his six month visit. Unfortunately MK Mills jnr passed away in the mid 2000’s and where the medals went after that we don’t know. This medal should stay in our family for generations as it will be passed down to myself and then my son as we all share the Kinnaird name.Many thanks Glyn in returning these medals home to loved ones, you do a great job.Thanks also to Tony in the UK for helping out and to Joy & Allan H for passing the medal over. 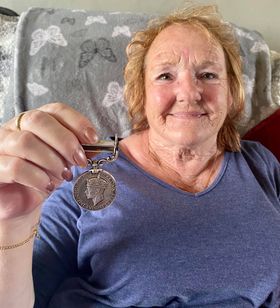 Posted by Lost Medals Australia at 14:15