When I looked at the obverse (front) of this 1939-45 Star it was exactly as I would expect it to be. However, the revere (back) was a bit surprising. The naming is modern laser engraving rather than being impressed. Also the name is in the lower third of the star rather than being central. I have no doubt that this is a genuine medal and is most likely a late issue.

This medal was awarded to NX157953 Norman Ernest Isaacs. Norman served as signalman in the Corps of Signals and after the war settled in western Sydney. Norman's medal was sent to me by the Pitt Town and Districts Sports Club which makes sense as it is close to where Norman and his family lived.

My search led me to Norman's granddaughter, Jodie, but what I couldn't find was her contact details. Through a circuitous route which involved a message being passed by Norman's great grandson I've now contacted Jodie and will return this medal to her in the near future.

Jodie has provided me the following details about Norman:

'A brief background on my Pop is he served as a Signalman in Communications branch during the war travelling to many countries.

I have attached the only photo I have of him during the war. He is in the top row on the far right. When he returned he went back to his family home in Guildford then lived many years with my Nan at Fairfield whilst working as a painter. The best story was he painted the Channel 7 tower. Then when they retired he took my Nan and his beloved Torana and dog Kim on a tour of Queensland for a few years then they settled back on the Central Coast NSW at Lakehaven and they lived out their years there. He still had his Torana up until the day he passed! He loved the beach, fishing and his horse racing. He lived a fairly simple life and enjoy the simple pleasures.' 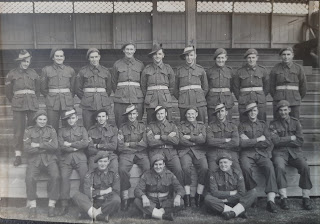 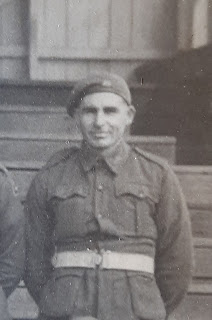 Thanks to Sara at the Pitt Town and Districts Sports Club who sent me the medal and to Jarrod, who also bares the Isaacs name.

The returned medal tally is now 2638. 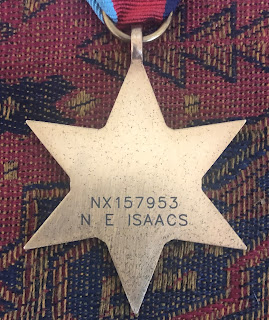 Posted by Lost Medals Australia at 10:06