When I receive medals that come in the same parcel but with different names I try not make an immediate assumption the soldiers are connected in some way. However, when there is a connection it usually tells a story that I wasn't expecting.

In May 2020 I received four medals in the post from Margaret of South Australia. One was a British War Medal awarded to 3328 Charles Ferguson. Two others were a British War Medal and Victory Medal pair awarded to 13455 Charles Herbert Carbert Woods. The forth medal in the parcel was a bit of a surprise. It was a German Iron Cross dated 1914. Also with the medals was the original box of issue for Charles Ferguson's medals.

I first started searching Charles Ferguson as he was killed in action on 12 October 1917. Charles was member of the 48th Battalion, AIF. With a date of death in October 1917 I surmised that Charles was killed during the Battle of Passchendaele. Charles has no known grave and is commemorated at Menin Gate. Charles service record contains several emotive letters from his father, John, seeking information about Charles possessions. John was of the opinion that Charles' possessions were stolen by other soldiers. This could not be proved but caused John much distress.

Charles' mother was Mary and I found her death notice on Trove. This gave me several leads about Charles' siblings. He had two sisters; Anne Maude and Lillian Chester. He also had a brother; Sydney John.

I found very little information about either of these families other than through Sydney Ferguson and it is his family that I'll return the medals to.

The returned medal tally is now 2641. 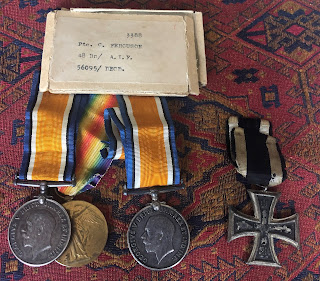 Posted by Lost Medals Australia at 15:12