This return has been 13 years in the making and finalised on the barest of information.

I received the 1914-15 Star awarded to SS-17784 Henry Payne in 2007 and it took several revisits to the records to draw everything together. Henry was a soldier in the British Army Service Corps and it was considerably lucky that his pension record is available on line. Henry was discharged from the Army in 1916 due to being medically unfit. I was a bit surprised by this until I worked out that Henry was born in 1867 making him 47 when he enlisted. In 1911 Henry was living with his 88 year old widowed mother and four siblings so I made an assumption that he didn't marry or have children.

I found Henry in an Ancestry family tree and sent a message to the tree owner. Overnight received I received a reply from the tree owned who is the great grand daughter of Henry's sister Ellen.

Thank you to Glenda R who sent me the medal via Charlie E.

The returned medal tally is now 2601. 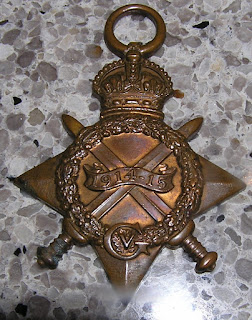 I forgot to take a picture of the reverse f the medal. An update will come soon.

Posted by Lost Medals Australia at 19:05