Other than the WWII DVA nominal roll entry for WX10318 Francis Herbert Nunn, I found no other Australian records for this soldier. This was a very frustrating search that commenced in 2013. I was only thanks to snippets of information that appeared on genealogy website over several years that helped me piece together Francis' family tree. After Francis discharge in 1944 I found no more information about his.

What I did know was when and where Francis was born. His place of birth was Steeple Bumpstead, Essex, UK. His siblings were William, Gladys and Eric. This information led me to Ben who is the great great  grandson of Francis' sister Gladys. Francis was the only member of his family who emigrated to Australia so these medals will be sent to England where his family remained. 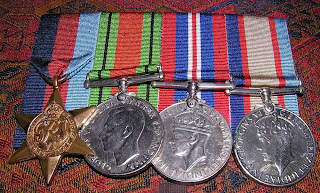 Posted by Lost Medals Australia at 07:27