This is a really interesting story which threw up several surprises along the way.

My part started recently when my colleague Nick B showed me a WWI pair of medal awarded to 4481 CPL George Henry Dawe. George was originally allocated to 5th Battalion, then reallocated to 46th Battalion before ending up in 4th Division HQ. Nick had already established that George was mentioned in dispatches and here is a citation. 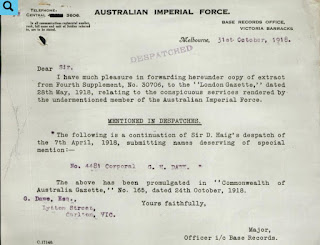 George was 32 when he enlisted and his father was his next of kin. This made me wonder if he ever married. I'll come back to that because the first post war information I found about George was when he gave evidence against a Victorian MRH.

One other article about this case mentioned that George was an actor which led to a whole lot of new search parameters and results. This time I found two articles in The Bulletin about George. The first about being an actor in London before WWI. 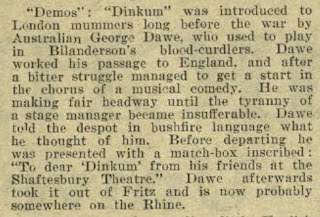 The second is about his death in 1924 aged 44. It also confirmed that he did marry. 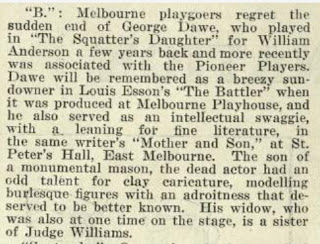 George's widow was Eleanor, better known as Lala. They had married in 1921. Lala's first husband was KIA during WWI. This information led me to George's grave. George's family were monumental masons which might explain the grandeur of the family headstone. George also worked as a monumental mason when acting jobs were scarce. 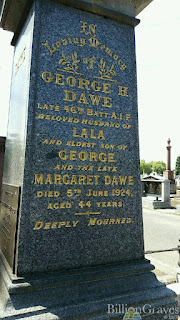 Knowing that George didn't have a direct descendant led me to look at his wider family. Other names on the grave gave me the information that I needed. George's brother Frederick also served in WWI with 2nd Field Company Engineers. The family line I was able to follow was through Fred's eldest daughter and onto her oldest son. This is Bob G who is George's great nephew.

I've now connected Nick and Bob and will post photos of the medals in the near future. The returned medal tally is now 2605.

Posted by Lost Medals Australia at 18:45