This return benefited from a combination of an uncommon surname and a regional town making narrowing down the family I was looking for relativity easy.
This British War Medal was awarded to 2125 William Stanley Cousins. He is listed as being posted to 1st Battalion, AIF as well as 1st Australian Light Railway Operating Company. It would have been interesting to see the medal named to a railway unit.
I received the medal the other day and it took a little while to work out that after WWI, William married but was divorced not long after. They didn't have any children. There weren't many public records available other than a few electoral roll entries. However, the search opened up once I found his funeral notice which I've added below. The key was the name of William's sister, Mrs R Leslight. This turned out to be Dorothy Leslight, nee Cousins. This information aligned with a letter from Dorothy to the Army in 1968 applying for the Anzac Medallion. The letter also stated that Dorothy was William's next of kin.William had died in 1948.
Dorothy lived in Murwillumbah and a quick check of her surname and this town in the White Pages led me to the correct family. As it turns out the family member I spoke to has, over the years, collected up other medals awarded to members of this family. Now William's BWM will be added to the collection.
William's nickname was Nugget, I wonder why?
Thanks to Christopher W who sent me the medal.
The returned medal tally is now 2480. 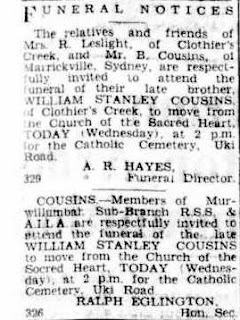 Posted by Lost Medals Australia at 15:11