This has to one of the most complicated searches I've attempted. It wasn't one of the longest I've faced but the tragedy, movements and marriages that occurred across only two generations made for some complex research. In the end I had to call in some experts who were able to point me in the right direction.
The search for the family of 2696 Private James Arthur Wilson commenced in April 2020 when I received the British War Medal and Victory medal from the Liverpool Station of the NSW Police Force. James' AIF service record is surprisingly long at 139 pages. While it held many clues it also threw up more questions than there were answers.
James enlisted in 1915, aged 22, and allocated to 6th Battalion, AIF. He was also entitled to the 1914-15 Star but this medal was not in the package sent to me. His next of kin is listed as his mother Frances Louise Wilson, who sometimes in the records was called Louise Francis. His sister was Blanche Wilson born in 1902. James' service record is filled with letters from Francis and Blanche. This correspondence are requests for information about James after he was wounded on two occasions and also asking for money to be allotted from his pay as Frances was a widow. Even Blanche writes to the Army asking for information about James as she 'has been in a convent' and doesn't know where James is. Some of these letters are terribly sad as they were written after the Army had information about James and didn't pass it on. Other than confirming Frances' address in the electoral rolls and a very brief death notice from 1948, there was no other information about her. All I could find out about Blanche was a news paper article from 1912. The address given in the article was the address for Frances in the electoral roll.

In James' service record is the extract from his marriage certificate which is dated 10 September 1918 but the marriage occurred on 17 April 1918. This is for James marriage to Grace Baker in the UK while he was recovering from wounds. From the letter written by Frances and Blanche it doesn't appear that he told them of his marriage. In the extract it states that James' father is also named James Arthur Wilson, occupation grazier. I could find no other information about James the father. James and, I assume Grace, returned to Australia in May 1919. He took his discharge in WA. However, by 1920 they were back in Sydney and on 9 September 1920 James died in Prince of Wales Hospital, Randwick of Tuberculosis. This was as a result of his war service. Blanche was finely told about this in 1921. James' funeral notice didn't provide much help.

Through the 1920's Grace wrote to Defence on several occasions about James' medals. It appears that Defence thought James was still in the UK and his medals were dispatched to Australia House, London. Eventually, the medals, memorial plaque and memorial scroll were forwarded to Grace. These letters provided the evidence that I needed to follow Grace firstly to North Queensland where she lived in a pub and later on a station. It also showed that Grace remarried. This was in 1924 to William John Nairn. If the search wasn't confusing enough already this is another twist.
I found Grace and William's marriage in the NSW BDM. I also found them in the electoral rolls and details of William's death in 1930 which gave the names of his parents; Major and Catherine Nairn. This is his death notice.

I couldn't find a service record that aligned with William's details and being a member of 26th Battalion. But I did find some Ancestry trees that gave William's details as married to someone else and dying in 1954. Eventually I just left this line of inquiry alone.
In 1935 Grace wrote to Defence again and asked if James had been awarded a Distinguished Conduct Medal. She had been told by war time friends of James that he had received his award. This letter is on page 28 of the service record and is reveling as it the first mention of a son. As someone who drafts a lot of responses to letters that Army receives from the public, I was a little surprised at the abruptness of the reply that Grace received (page 27). We are far more polite and empathetic now.
The search for details of James and Graces' son defeated me. There was no mention of him in the electoral rolls and I wasn't even sure what surname he was using. The next clue I found was in Graces' death notice. A son wasn't mentioned but a granddaughter named Judy from Victoria was.

I tried all sorts of search variables. For example, I estimated that a son would have been born about 1918-19 making him in his early 20s when WWII started. Assuming he kept the name Wilson I couldn't narrow down a son of Grace Nairn or even Grace Wilson. By this stage I estimate I had expended in excess of 40 hours in research time and just couldn't progress the search.
I then turned to a couple of genealogy groups including the Australian Surname Group. Within hours they had provided the last piece of the puzzle.
James and Grace's son was also named James Arthur Wilson. James joined the RAAF during WWII and was the aircrew of a Hudson aircraft that disappeared over Rabal on 19 January 1941. James was presumed dead but this wasn't confined until 1946. This is the report about the circumstances. This website gives the details of Hudson A16-145 in which James flew.
James was married to Margaret and their daughter, who was one when James died, is Judith Ann.
The Australian Surname Group also gave me information that Margaret remarried and Judith had a half brother. I couldn't work out exactly who Judy was without a married name but I was able to find her brother Frank. We spoke yesterday and Frank kindly provided me with Judy's phone number. I spoke to Judy today and we both were able to fill in gaps in the story. For example, Grace continued to use the name Wilson even though the records I accessed after 1924 listed her as Grace Nairn.
Thank you very much to Liz, Sylvia and Sue of the Australian Surname Group who were able to find those bits of information that eluded me.
The returned medal tally is now 2482. 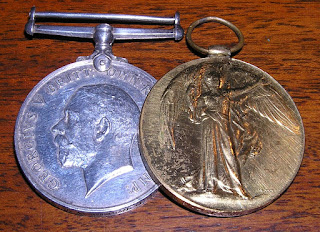 Posted by Lost Medals Australia at 21:13