This is the final set of Remount Unit medals that were sent to me by Murray M. The other two groups were to Henry Beauchamp and Matthew Kelly. This 1914-15 Star and Victory Medal were awarded to 1355 James McElhinny, 5th Squadron, 2nd Australian Remount Unit.
I thought that James would be easy to follow due to his distinctive surname. This was not so as there was a James Alexander McElhinney living in NSW at the same time. As it turned out they died only a year apart and this caused a bit of confusion. The James I was searching for was born in Braidwood, NSW and lived for a while in Goulburn, NSW before settling in Sydney. He was 49 years old when he enlisted. James was married to Alice Elenaor Wray but that didn't have any children. This led me on a search for the descendants of James' sister but unfortunately this family line ended in 1930 when James' four year old great niece died.
It took me two months to get to this point so this morning I went back and looked at Alice's family and soon found the family tree of her brother. I've now been in contact with Jame's great great niece and will be soon sending her his medals.
This closes this the Remount search started by Murray but he has already set me on another path to research a British RAMC Victory Medal.
The returned medal tally is now 2372. 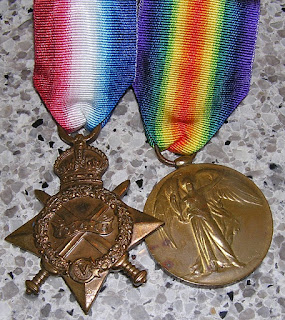 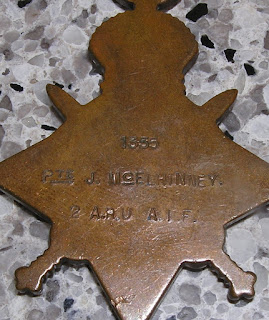 Posted by Lost Medals Australia at 15:19