This is the second of the Remount Unit medals that Murray M sent me.
This 1914-15 Star was awarded to 390 Matthew Kelly. Matthew stated his age was 49 and 8 months when he enlisted in late 1915. Right on the age limit of 50 to enlist in the Remounts. However, it appears that Matthew might have lied about his age to make himself 10 years younger. All the evidence points at Matthew being born in 1856 making him 59 rather than 49. He died in 1938 aged 82 which confirms the year of birth. While it was common to see young men put their age up it was far less common to see an age put down.
Matthew's death notice names his numerous children with Allan being the oldest. Allan also served in WWI as 559 Allan Wain Kelly, Australian Army Veterinary Corps. Allan was very easy to follow through the electoral rolls. His second name of Wain was what I used to trace his descendants.
One of Allan's sons is Kevin Wain Kelly who served in the RAAF during WWII. The use of the name Wain also extend to the next generation of this family and I was able to identify Kevin Kelly Jnr in the 1980 electoral roll. The leap forward 39 years and a current contact number for Kevin was a bit of needle in a haystack to find but a punt lead me to North West, WA where Kevin now lives. Through Kevin Jnr I've now got the contact details of Kevin Snr who lives in Victoria. To add to the family service record, Kevin Jnr also served in WWII, Joy Alice Meharry.
Matthew's full medal entitlement is the 1914-15 Star, the British War Medal and the Victory Medal.
The returned medal tally is now 2361 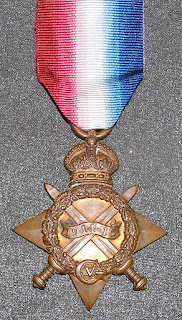