By just saying that this search took 30 hours from start to finish belies the research effort that went in to locating the family of Ted Newman.
I collected the WWII group of four medals and other personal items belonging to NX174330 Edward (Ted) John Newman from the Post Office on Friday afternoon. The medals were sent to me by Boyd T who had the medals as the result of being the Executor of the Estate of the brother of Ted's second wife. Are you with me so far? This is just the start of the complications I faced in this search.
I started looking at Ted and his family yesterday at 1000. As the search progressed I found little documentary evidence and when I did it only gave me 1/2 a clue and then there was no other evidence to corroborate that clue. I started with what Boyd know of Ted. That is, he was married and had a son. He then divorced and remarried to his second wife, Barbara. Boyd was able to tell me that Ted died in 1974. The electoral rolls from 1950 to 1974 gave me no additional information.
I found Ted's death notice and the next 1/2 clue. The notice provided the name of Ted's son, Warren and his wife Mary Anne (the spelling varied across sources). However, a reasonably common name like Warren Newman was difficult to pin down in the public records. For a couple of hours I just couldn't find Warren or Maryanne and out of desperation looked at the NSW marriage records which, on line, are available up to 1969. To my immense relief I found Warren's marriage from 1968, this included his middle name and Maryanne's maiden name. Other than confirming their address until 1980 and yet another variation of Maryanne's name, I got no more information. The White Pages was of no help.
What I also gained from Warren's marriage details was the area he was in at the time, this combined with Maryanne's unusual surname sent me down another line of inquiry. I found several families with the same name in the same geographic area and one family tree on Ancestry. Even though Maryanne wasn't mentioned in this tree I had no where else to go so I sent off a message to the tree owner.
By the time I got to this point of the search it was 1800 last night and eight hours of frustration was at an end. I even made the comment that if my message was to the wrong family I was not sure where else to look for Warren.
Not two hours later I had a message via social media from Warren's daughter just making sure that my request to contact the family was legitimate. 30 hours after I collected the medals I was in touch with Ted's family and could confirm that I indeed had his medals.
This morning I spoke to Warren and I was able to explain how the medals had gone via Boyd to me. We also spoke about his grandfather who served in WWI. This was Leslie John Felton and the link will take you to his WWI service record which Warren has not seen before.
It really has been quite nice to assist Boyd find a solution to finalising the Estate he was responsible for. I am very grateful to Troy who passed my Ancestry message on to Warren's family and also Lynda who has connected me with Warren. The pictures below are of Ted's medals, his discharge certificate and identity discs.
The returned medal tally is now 2370. 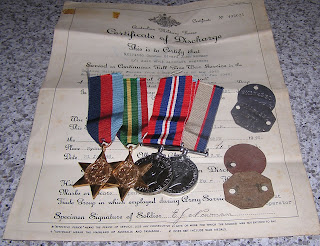 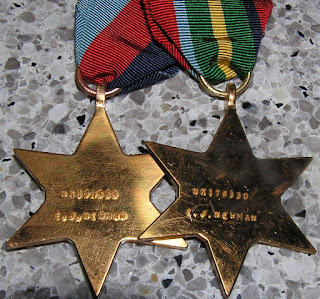 Posted by Lost Medals Australia at 14:25