This return is a cracking story, much of the research has been put together by others and I'm very grateful that it landed with me to put the last piece in to the puzzle and locate the family. It is also a pretty complicated story so I'll try to be succinct.
My part in this epic began recently when I received an email from Murry M telling me that over the years he had obtained several medals awarded to members of the Remount Units. The Remount Units were pretty interesting in their own right. In order to free up Light Horse troopers who were left in Egypt while the majority of the regiments were fighting at Gallipoli, the Remount Units were raised. There were two units each of four squadrons. The enlistment age for a remount soldier was raised 50 and they were drawn from Boer War veterans or men who had experience handling horses. Following the withdrawal from Gallipoli the remount soldiers were used to deliver horses to Palestine and Syria.
Murray's interest in Remounts was due to a member of his own family having served in the same unit. 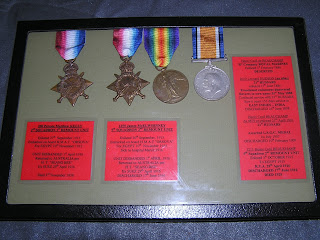 These are the medals that Murray sent me along with a substantial amount of research.

The first soldier I looked at was 1211 Henry Cecil Beauchamp. Henry's WWI AIF service record was easy to locate on the National Archives of Australia website but from it many questions came out. Firstly, his attestation paper says that he served in the 21st Lancers, a British unit. This explains the experience that Henry had to be a remount soldier as well and being aged 48. Later in the service record there is a letter (page5), dated 1967, from his daughter applying for the Anzac Commemorative Medallion. This was presented to soldiers who had served at Gallipoli. In this letter Henry's daughter states that her father had served at Omdurman (in present day Sudan), South Africa, India (with Sir Winston Churchill) and in WWI, including having gone to Gallipoli. The letter is annotated with the letters NE which stands of Not Entitled. Henry did not go to Gallipoli and I wonder if he embellished his record a bit despite his extensive service. This question comes up again in later research.
Two more interesting pieces of information that came out of his daughter's letter. She stated that prior to enlistment in the AIF they lived at Duntroon and that Henry's Long Service and Good Conduct Medal had been stolen at some time. The mention of Duntroon interested me and I found a link that confirmed that Henry worked as a civilian groom at RMC.
I found that Henry died in 1929 but it was his wife's death notice that helped me move forward. However, looking back at Henry's life made things a bit more complicated. Henry was know at a point in time as Henry Cecil Strickland de Beauchamps, Henry Cecil de Beauchamps, Leonard Hudson and Henry Cecil Beauchamp.
On 1 February 1886, aged 18 years and 7 months, Henry enlisted in the Royal Marines and was assigned to Depot Battalion. Not long after that, on 22 June 1886, he enlisted in the 21st Hussars under the name Leonard Hudson. Luckily, these British service records are available unlike meany that have been destroyed. There is a note on one page to say that Leonard's alias was Henry Cecil Beauchamp and a comment from his Commanding Officer that says:

'Claimed the benefit of the Queen's Pardon having confessed to having fraudulently
enlisted into the 21st Hussars whilst belonging to the Royal Marine Light Infantry'.
This entry is undated but he continued to serve at the following locations:
Home (UK) 17 June 1886 to 21 November 1887
East Indies 22 November 1887 to 23 April 1894
Home (UK) 24 April 1894 to 16 June 1898.
No mention is made of serving in Africa and with a discharge date of June 1898 he missed the Battle of Omdurman by three months as it occurred in September 1898.
Henry re-enlisted on 23 April 1900 in to the 21st Lancers and served through to 10 February 1909 when he discharged with the rank of Sergeant. He qualified for his Long Service and Good Conduct medal in 1907. There is no mention that he served in South Africa. 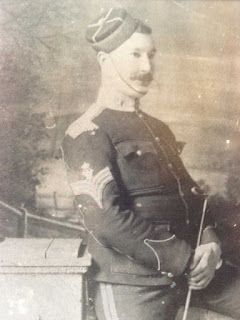 This is Henry in his Lancers uniform.
(Reproduced with kind permission of his family)

It is not clear exactly when Henry moved to Australia. It must have been about 1911. He would have been in his mid 40s. It was Henry's wife death notice that gave me the information I needed to move forward. In total they had 8 children, some who also emigrated while others stayed in the UK.
Their eldest son was Harry Cecil Beauchamp. Harry's son served in the RAAF during WWII. This was FSGT Warwick Melville Beauchamp.
Warwick died on 19 April 1944 when his Liberator aircraft crashed while taking off at Sigiriva for an attack on an enemy convoy. Warwick is buried at Liveramentu Cemetery, Columbo. Warwick is mention in the 2014 Anzac Day address that was given of the HE Robyn Mudie, the Australian High Commissioner to Sri Lanka. The following photos are of Warwick's headstone and the funeral of Warwick and his crew mates. 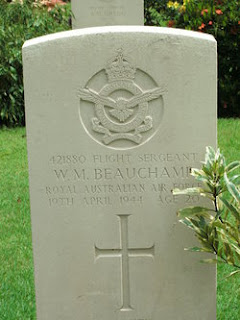 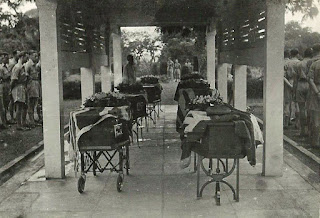 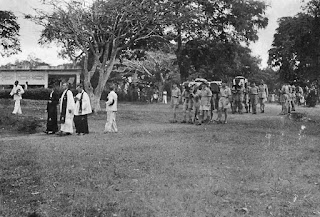 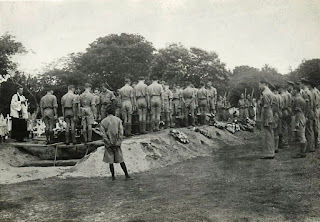 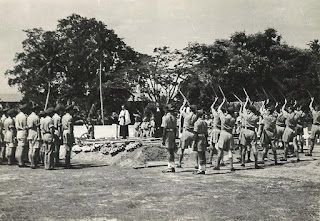 The family that I followed was that of one of Henry's daughters, Evelyn. It is her grand son, Brendan who I recently contacted and will send Henry's medal to. Henry served in the AIF from October 1915 to June 1916. For this service he was awarded the 1914-15 Star, the British War Medal and the Victory Medal. It is the British War Medal what will be returned to his family. Where his other medals are is an interesting question. I also wonder what medals he was actually awarded in addition to the confirmed Long Service and Good Conduct Medal. 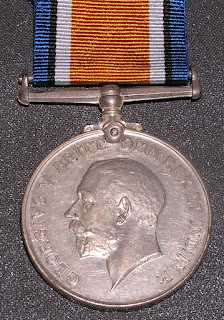 Murry is to be congratulated on the research he did prior to handing over everything to me. I'm just so pleased to be able to have quickly located Henry's great grandson.
The returned medal tally is now 2360.


Posted by Lost Medals Australia at 16:19