Bill's latest story.
One of the things that Glyn and I have often commented on, is when we receive medals that have done the rounds. The search to return ‘George’s’ medals definitely fall in to this category and along the way been through many hands.
Bought in an Op-shop in Adelaide in 2004, they laid in a drawer till 2010, when the son of the purchaser found them and started to look for the recipient or his family. Eventually they landed in my mail box, late in 2016, and the search began anew.
War Graves, often my first port of call, had no registered date of death. So began a long hunt, via the State Library, and it’s newspaper archives, and the Electoral Rolls.
First came a series of conflicting death notices. In short it soon became apparent that George, had been married, divorced and later remarried, and had outlived both wives. Then came the next question; if ‘George’ had died in 2006, as I now believed, how had his medals come to be sold in Adelaide in 2004. Unfortunately, since his death 2006, the funeral directors who handled his funeral had been taken over, and the hoped for records that would show a possible next of kin, had long been mislaid. In addition, ‘George’s’ ashes like his two wives had been scattered, and the name on his file was that of the Funeral Company which had been taken over.
Complicating the search was that none of the names appearing in ‘George’s’ death notice were found in the Electoral Rolls as living with ‘George’ and his first wife.
So now it was back to the State library, and the slow search to find a marriage notice of his daughter, or should I say a lady who shared the first name of ‘George’s’ daughter.
Then the slow grind to find her and her husband, only this time via a combination of both of their names on the electoral rolls. However, for every step forward, I found myself slipping back. Particularly when I thought I had found ‘George’s’ daughter and her husband. But he had moved following the death of his wife, ‘George’s’ daughter. Fortunately the newspapers were up to date and the funeral directors willing to pass my details to the family, in this case ‘George’s’ son in law.
'George’s' medals are now home, with his grandson. Shortly they will be wending their way to A1 Service medals (that’s a free plug, Glyn). I then hope to post an updated picture, of ‘George’s medals.

The returned medal tally is now 2359. 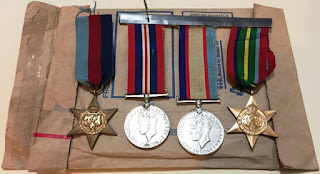 Posted by Lost Medals Australia at 08:58