Bill combined with the Victorian Police Force to complete this return.

This has been a long time finalising.
The background to these medals are that the veteran died in April 2013. His wife passed away in January 2015 after which the family home was sold.
The new owners decided in 2017 to update the house. It was while a second story was being added that the medals were found. At that point the Police at Corio, Victoria became involved and later asked for my assistance.
The veteran’s daughter died in 2018. Her husband then kind of went on a ‘wander’. Finally I located him via his wife’s hairdresser (don’t ask). All that is now passed and the medals are ‘home’. Interesting way the War Medal and the Australian Service Medal were mounted. Also they were wrapped in plastic and paper so they are in very good condition. It appears that the veteran wore them each ANZAC day, up until just before he passed away.

The returned medal tally is now 2359. 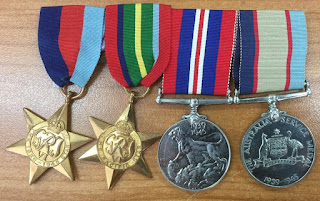 Posted by Lost Medals Australia at 13:16