This has been one of those searches that has taken several researches many hundred of hours to finally come to a successful conclusion.
I first received the WWII medals awarded to QX15327 Stewart Raymond Sergent in March 2005. They were sent to me by the Emu Park RSL sub-branch in Queensland. Stewart proved to be very elusive to locate as he had two marriages and children from both of them. His children were all female so we had the added complication of trying to find there married names, if indeed they had married.
After some very detailed research, John D finally managed to crack the code and follow the family path to Stewart's daughter, Dulcie. I am very grateful to John for his persistence with this one. Finally success after almost eight years.
I do have a tinge of disappointment. From September 2006 until July 2008 when I was last posted to Townsville, I worked about 1 km from Dulcie's house.
The returned medal tally is now 1238 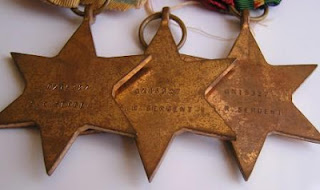 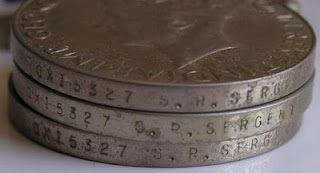 Posted by Lost Medals Australia at 14:53