This is another return that has taken many years of research to bring to a conclusion
I received the Imperial Service Medal awarded to Evelyn Bessie Spradbery in 2006 from Jackie E at Australia Post. A little bit of searching gave us the basics; Evelyn's husband name, the London Gazette entry for the award and her date of death in 1991. It took a little more effort to determine that Evelyn and her husband had a daughter by the name of Gwendoline J Spradbery. That led us down one path of enquiry. After much effort we established that Gwendoline married Brian A Spence. Then the trail went cold.
During my research I even wrote a letter to the local paper and council where Evelyn lived. I did not receive a response from either organisation and I doubt very much that the letter was published. I even went as far as to post a story on this blog in 2011 in the hope that someone might do a search of Evelyn's name and come across my entry.
Several of our researchers have also spent considerable effort looking for Gwendoline, particularly Morris C. All up many hours of research have put together some very thin leads. Last week I decided to revisit this case. I stumbled across an online phone book entry for Gwendoline and Brian living in Kendal, UK. The website didn't provide an address or phone number so I had to think of a different method of attack. I then turned to Brian's name. This led me to come across a 2011 council planning committee document that had recently been posted on line. The council in question was the very one I had written to in 2006.
What this document gave me was the subject of the planning application which in turn led me to other documents that opened up more clues. I learnt that Mrs G Spence was the local coordinator of blue badges for handicapped parking. A letter to the editor of the local paper about this subject gave me the best led yet. Gwendoline goes by the name Gussie. Oh, the paper that Gussie's letter was in was the same one I had also written to in 2006.
Once I had Gussie's name I found another obscure reference to her which included a mobile phone number from 2005. On a hunch I rang that number tonight and within seconds was talking to Gussie. We had a wonderful conversation and I am so pleased that all this effort by countless people has come to such a successful conclusion.
The returned medal tally is now 1239. 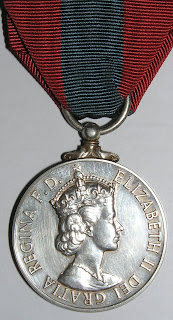 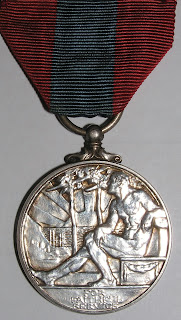 Posted by Lost Medals Australia at 20:02