The WWI service of 4565 Norman Robert Price seems to be fairly typical based on his service record. He was hospitalised on several occasions, went AWOL on several occasions and spent time in France and England. As per usual the service record doesn't give much indication about where Norman fought but as a member of the 2nd Battalion, AIF, Norman would have been involved in action around Ypers.
What I find interesting from his service record is the correspondence from the mid 1940s where Norman is requestion replacement medals and record of service which were lost. The medal I have is the original Victory Medal that Norman was awarded not a duplicate he would have received much later.
I lost track of Norman around 1946 so I then had to start tracking other family members which included Percy Price who was a POW during WWII. I ran out of leads when the online electoral rolls stop at 1980 so as a last ditch effort I placed a request in the Daily Telegraph In Search column and I have now been contacted by the Price family. Normans Victory Medal will soon me returned to Percy's son.
This medal is from the NSW RSL box and the returned medal tally is now 1245. 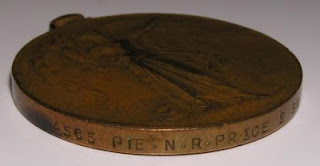 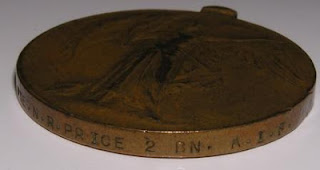 Posted by Lost Medals Australia at 11:45