This is one of those searches which I wished happened more often. This afternoon I had a case referred to my by the WA RSL. The WWII War Medal awarded to F3622 Cornelius Lawrence Haskell (known as Laurie) had been found in a Perth suburban garden. A quick check of the electoral rolls showed that Mr Haskell had lived very close to where the medal was found. The electoral roll also gave me the name of Mr Haskill's son. A quick check of the White Pages provided me with the phone number of Mr Haskill's son and within three minutes of receiving the initial request for help I was talking to a member of the Haskell family (sorry Bill).
A broader check of Mr Haskell's service shows that he was Mentioned in Despatches during his service with the RAN.
Thank you to Sean M who found the medal and wanted to see it back with the family. The returned medal tally is now 1224. 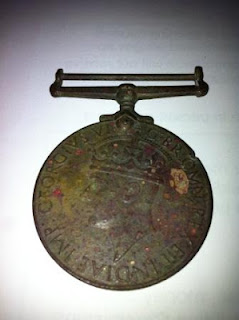 As can be seen in the photo this medal must have been buried for many years to now be in this condition.

Posted by Lost Medals Australia at 17:32