The 1914-15 Star and British War Medal awarded to John were sent to me by Trevor Hogan from the Kalamunda RSL sub-branch. Trevor and his fellow RSL members were keen to see these medals returned to John's family. When the medals arrived the first surprise was apparent immediately.

It is not unknow for medals to have mistakes on them but actually seeing a mistake is not very common. The 1914-15 Star has the number 3330, however, the British War Medal has the number 3350. John's correct number is 3350. These differences can be seen in the pictures below.

The second surprise is who John named as his next of kin. I often see soldiers who nominate a friend as the NOK. The circumstances tend to be that the soldier was an immigrant and had no family locally or left in their country of origin. John nominated his friend Annie Taylor as his NOK. Annie's address was care of Richard Taylor of Baddera, WA. It took some hours of research to determine that Annie was the 13 year old daughter of Henry Richard Taylor.

At the time of his enlistment, John was 42 years of age. He was a single miner having emigrated from Lancashire, UK. I can only speculate that he named Annie as his NOK is case he was killed in action and she would receive any benefits. John survived the war, although he was wounded on several occasions while serving with 11th Battalion. He was discharged in late 1917 and returned to Baddera. That is the last public record I could find that confirms John's location. I think he died in 1929 having never married.

John was born in White Haven, UK in 1873. I found his birth record but there was no additional information about his parents or any siblings. I then focused on Annie as the NOK. Annie married into a family with a very distinctive surname and were from a regional area north of Perth. Using the electoral rolls I was able to determine the names of Annie's children. One son is named Winston. This first name, combined with the distinctive surname, made the last phase of the research easy. Within 10 minutes of working out Winston's name I was speaking to him on the phone. The whole story of John, and his connection with Annie, was very exciting for Winston and he planned to share it immediately with his older sisters. Winston was extremely grateful to the Kalamunda RSL for wanting to see these medals returned to John's NOK.

I am thankful for the trust that Trever and the Kalamunda RSL placed in me to research these medals. This search is quite unusual and with an outcome that I didn't expect.

The returned medal tally is now 2651. 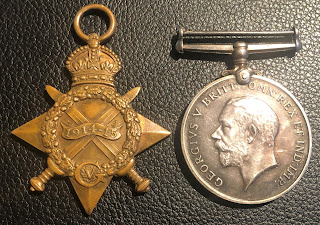 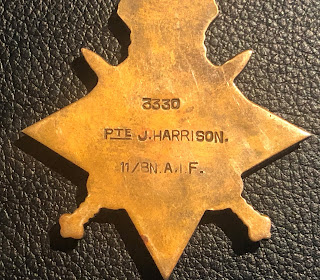 Posted by Lost Medals Australia at 13:02