Medals turn up in the places where there is often no logical explanation as to why is should be there. When Susan L contacted me about a medal she found in Goulburn, and there was no family I could immediately identify in the area, I set aside why the medal was found about 70km north of where I live.

VX14581 Alexander Charles Coffey was born in Maitland, SA which is on the Yorke Peninsula to the West of Adelaide. His life was a little confusing and finding a relative, despite a large family, was a little difficult. Alexander, sometimes referred to as Alex and at other times Alick, enlisted in March 1940. In 1942, while in Brisbane, he married Phyllis. The trail of Phyllis Coffey ran out not long after the war, although she was still in Brisbane after WWII when Alex was was living elsewhere. I had to assume they divorced. There is no evidence they had any children. I found Alex in 1953 living with a new wife, Audrey. They were living in Goulburn which explained that part of the mystery. However, by 1956 both Alex and Audrey were dead. Once again, they don't appear to have had any children.

One of Alex's brothers, Patrick, was a licensee of two hotels in Goulburn so there is a definite link to that town but the lead ran out when I found that his brother and his wife also died in the 1950s. Having hit one brick wall after another, I refocused the research on South Australia. The clues that led to success was Alex's father's name, John and that he was from Kadina, SA. Almost immediately, I found the headstone for John and Flora Coffey. 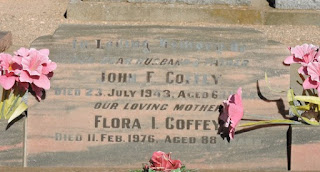 Knowing these two name narrowed the search and I soon found a tree which included John and Flora. I've now been in touch with Jess whose father in law is Alex great nephew.

I'll be sending Alex's Defence Medal off to South Australia in the near future. The returned medal tally is now 2631. 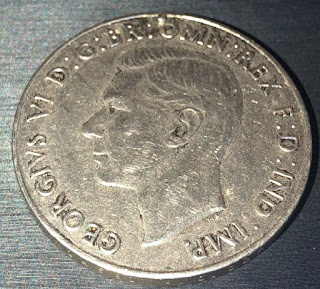 Posted by Lost Medals Australia at 17:24