Having a distinctive surname has its advantages and this search has definitely benefited from that. I received the Australian Service Medal 1939-45 last week from Ross G who found the medal amongst his father's medals. The medal was awarded to VX85608 Ronald Thackeray Tragardh. His brother also served in WWII, he was VX68469 Charles Thackeray Tragardh.

I found Charles' death notice which gave me the names of all of Roland's children. From there is was a process of elimination to find the contact details of the one of the children and this led me to Ron's son, Ian. As it turns out this is a family who has volunteered to serve their nation across the generations as Ian's son was also an Australian soldier until recently.

Thanks to Ross who sent me the medal. The returned medal tally is now 2629. 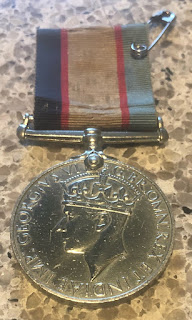 Posted by Lost Medals Australia at 16:52