This is the second pair of WWI medals sent to me by Sarah. The first pair were awarded to 2nd AM FH Hill. This pair was awarded to 53016 Alfred George Freeman. The story of Alfred's medals is a bit difficult to follow and I'm not sure when this pair was issued.

Alfred's number is not part of the regimental numbering system where each regiment or unit started at number 1. If a person moved from one unit to another they kept their number and added a letter to the end. However, Alfred enlisted in early 1918 and was a general reinforcement from Queensland rather than recruited direct to a specific unit. From his service record, Alfred looks to have spent time in 41st and 42nd Battalions before being reallocated to the Graves Registrations Detachment.

For some reason it appears that Alfred didn't receive his medals in the mid 1920 as was normal so in 1927 the RSL wrote to the Army on Alfred's behalf. There is a note on the correspondence to say that the BWM and Victory Medal were in store. On the final page of the service record it indicates that the medal were sent. However, in 1971 the RSL wrote again on Alfred's behalf stating that he had never been issued his medals with the notation: 'Issue'. I suspect that two sets have been issued and this is the 1971 issue. The numbering if very cleanly impressed and the naming on each medal is opposite. That is, the BWM naming is the correct way up when looking at the obverse but when looking at the obverse of the Victory medal the naming is upside down. This isn't uncommon but just suggestive of a later issue.

As far as I can establish, Alfred didn't marry or have children. I've located a great niece of Alfred's and will send her his medals later this week.

Thanks again to Sarah. The returned medal tally is now 2615. 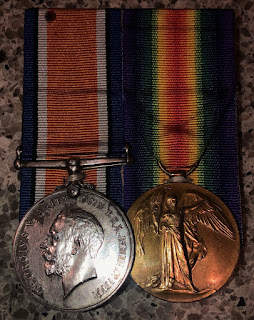 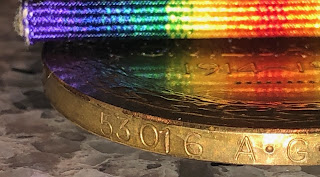 Posted by Lost Medals Australia at 20:43