Over the years we have been returning medals, there has only been two occasions when medals named to a member of the Australian Flying Corps have come our way. Bill has had one success and I had the other. Medals impressed with AFC are less common than those to other corps since the AFC was relatively small and if the soldier transferred in from another corps then the original unit or corps will be on the medal.

This pair was awarded to 2511 2nd Aircraft Mechanic Frederick Francis Hill. Frederick was a 23 year old carpenter from Rockhampton, Queensland. He was enlisted direct in to the AFC in Special Draft number 1. Following WWI, Francis returned to Rockhampton and raised a family. At some point his medals left the family and came in to the possession of a Vietnam War veteran. His daughter Sarah came across them and sent them my way.

From what I could work out, most of Frederick's children left Rockhampton and had their own families. His daughter Mavis settled in Melbourne, it is one of her sons that I've been in contact with and will send the medal to in the near future.

Thanks to Sarah for sending these medals to me. The returned medal tally is now 2613. 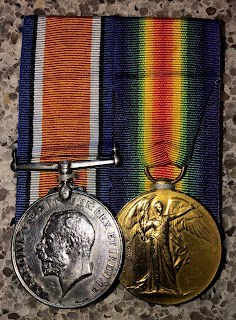 Posted by Lost Medals Australia at 14:35