I didn't have to put in much effort to find the owner of these three medals. The real effort was made by Roxanne S who told me that she works in a library in regional NSW. A person came in to her library with three medals which were believed to be stolen. Roxanne got my details from the NSW RSL but the person with the medals wasn't keen to take the matter further. Roxanne then took it upon herself to contact me and send on the medals.

What I received was an Australian Active Service Medal, Afghanistan Medal and NATO Medal. Based on the service details I was able to track down the owner who tells me that these medals as well as other valuable items were recently stolen. There is still a missin Australian Defence Medal out there some where. 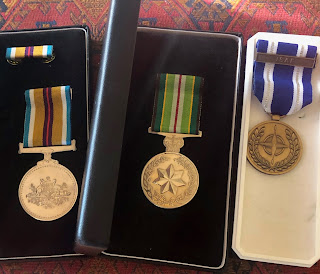 Posted by Lost Medals Australia at 11:25