The research for this return really wasn't that difficult, what sets this story apart from many others is the story of the soldier, the source the medals came from and who I returned them to this morning.
Just over a week ago I received an email from Elaine one of the co-founders of Canberra's Green Shed. I've established a fantastic relationship with Elaine over the years and returned several medals that have come to her via the Green Shed and that were then passed to me.
What Elaine recently gave me was a collection of WWI badges and trio of medals. What intrigued me immediately was a ribbon for a Distinguished Conduct Medal. Knowing that this medal has only been awarded to just of 2000 Australians between 1899 and 1972 I was keen to start the research. What concerned me a bit was the actual medal wasn't with collection that Elaine gave me.
It didn't take long to work out I was researching 528 Robert Bruce Taylor DCM, 21st Battalion AIF.
Known as Bruce, he was 19 when he enlisted. However, he must have been a talented soldier as was he was promoted to Company Sergeant Major by the time he was 21. I found multiple stories about Bruce in the newspaper archives. Some of these I've added below. From these stories I learnt that Bruce was aboard the troop ship Southland which was the first troop ship carrying Australians that was torpedoed and sunk.
Bruce served at Gallipoli and then on the Western Front where he was wounded. I later was told that his wound leg bone was set wrong and this leg was shorter than the other so he walked with a limp for the rest of his life.
Bruce was easy to follow through the electoral rolls. As was his son Grahame who served in the Royal Australian Electrical and Mechanical Engineers during the 1950. I was surprised to see that Grahame and his family lived in Canberra which would hoped would make my search for the current easy. The last electoral roll available on line which is from 1980, gave me the name of one of Grahame's sons - Gordon.
It took me a bit of time to work out that Gordon is in fact ABC journalist Gordon Taylor. Then came the hardest part - trying to get in touch with Gordon. I had to relay on some old fashioned technology; I picked up the landline phone, called the ABC switch and left a message.
When I spoke to Gordon we took a bit of time trying to work out how the medals came to be lost and why the DCM wasn't with what I was holding on to. Gordon did a check and soon found that he had the DCM which was great news.
This morning Gordon came to my work and I was able to return all his grandfather's items to him. He also bought along the DCM and I've added a picture of the complete group awarded to Bruce Taylor.
There are quite a few photos and newspaper articles that go along with this story but I felt is worth including them all.
Thanks go to Elaine and the Green Shed for trusting me to look for the Taylor family.
The returned medal tally is now 2416.

First is a picture of Bruce Taylor wearing his DCM 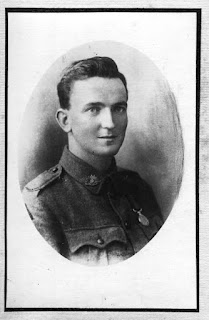 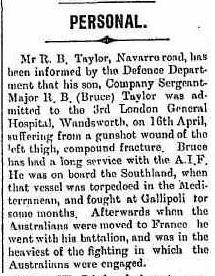 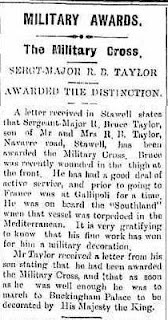 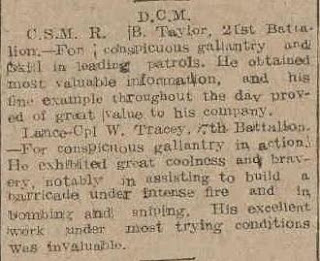 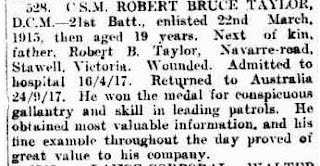 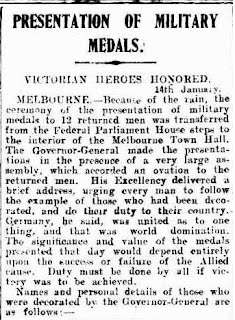 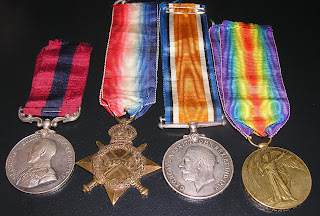 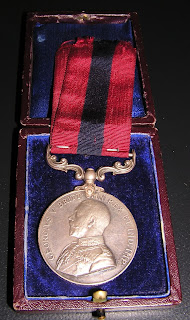 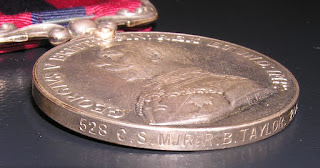 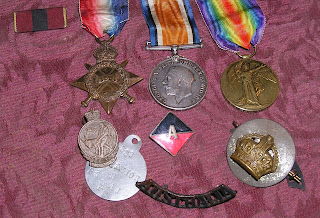 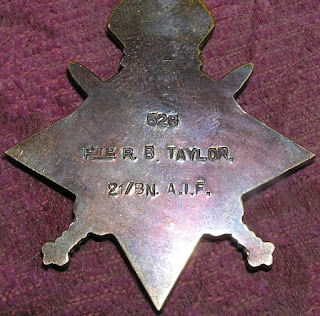 Posted by Lost Medals Australia at 21:05