So often we are unable to tell the full story of the life of a medal. There are just to many gaps from when the medal is lost until it is found and then sent on to either Bill or me. However, I think this time I can account of the full life of the Victory Medal awarded to 519 Private Bernard Joseph Bruton 3rd Battalion AIF.
Bernard was 19 when he enlisted in August 1914: an original member of 3rd Battalion. After training in Egypt, 3rd Battalion took part in the Gallipoli landings on 25 April 1915. I can only assume that Bernard went ashore that day as well.
The 3rd Battalion participated in the Battle of Lone Pine from 6 to 10 August 1915 and during this battle he was killed in action. However, he was initially announced as missing sometime between 7 to 12 August. Bernard was finally determined to have died by a Court of Inquiry that was held in the field in France on 5 June 1916. The evidence provided to the Court by a witness states that his body was seen on 6 August and that he was buried on 8 August at Brown's dip.
Now to the life of the Victory Medal. It was signed for by Bernard's father on 8 August 1922 and remained with the family. Lets skip forward to March 2019 when I received the medal from Joe D. Joe told me:


'Whilst putting my lawn in our newly acquired home over 40 years ago, I turned over an area of soil containing the remains of burned rubbish, as I shovelled it into a barrow I struck a piece of metal which turned out to be a WW1 Victory medal which I placed into a draw with bits and pieces that may one day come in handy. Recently whilst cleaning out the garden shed I came across the medal. This was at Newly Pl, Quakers Hill.'

I has taken me quite some time to work out the Bruton family tree and locate a relative of Bernard's but today I was in contact with Michael, Bernard's nephew. Michael asked me where the medal was found and I provided him what Joe told me. This all made sense to Michael who told me that 70 years ago the Bruton family lived on acreage that, after it was sub-divided, Newry Pl would have been in the middle of. The full life of Bernard's medal was now accounted for, although when it was on the ground, in what would become Joe's garden, it lived a hard life. As can be seen in the pictures the medal has lost it's ring and the edge is quite damaged.
The returned medal tally is now 2411. 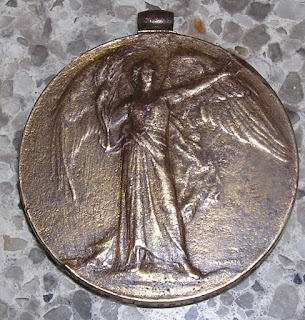 Posted by Lost Medals Australia at 21:16