This is a great story that covers three generations of Australian servicemen.
It starts with 380 Michael Joseph Feeney a 22 year old Irishman who enlisted in 1916 having emigrated to Australia in 1912. Michael served in the 4th Division Motor Transport Company, Australian Army Service Corps.
Following WWI, Michael settled in Rockhampton. He enlisted again, at the age of 48, in the Army, this time during WWII and served in the Volunteer Defence Corps. Older men were used for home service in WWII so that younger men could be released to fight overseas and Michael did his part. For his WWII service, Michael was awarded two medals.
These medals were purchased at a garage sale in Townsville 25 years ago by Jayson who mentioned them to Army PR soldier SGT Dave Morley. Dave passed he medals to me this morning and it didn't take long to find the second generation serviceman.
In the electoral rolls I found Michael, his wife and their son. This was Brian Michael Feeney. As I followed Brian it soon became apparent he was in the RAAF and in the late 1970s was living in Canberra. The 1977 roll gave me Brian's son's full name, which is quite distinctive. This is Chris, and the 1980 electoral roll listed his address as 6 RAR, Gallipoli Barracks. Here is the third generation. On a hunch I had a look on the Defence internal phone directory and sure enough I found Chris who is still serving in the Australian Army. 20 minutes after receiving Michael's medals from Dave I was talking to Michael's grandson. Chris tells me that he has never seen the WWII medals and has no idea how they came to be at a garage sale. Chris has been looking for Michael's WWI pair of medals for many years but there whereabouts remain a mystery.
Thanks to Jayson for wanting to see the medals returned to the family and to Dave for connecting me with Jayson.
The returned medal tally is now 2379. 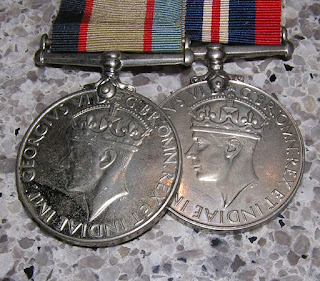 Posted by Lost Medals Australia at 20:41