In the past I've done a return for Daryl B which must have been satisfactory to him as Daryl called me recently about another set of medals that had come his way. I collected the WWI British War Medal and Victory Medal awarded to 388 Charles Raymond Thompson yesterday and have now been in touch with Ray's great nephew.
Ray was a member of the 22nd Machine Gun Company having enlisted aged 25 in 1916. By March 1917, Ray had spent time in England to do further training then proceeded to France with his unit. On 14 September 1917, Ray was killed in action. His body was never recovered so he has no know grave. Ray is commemorated at Menin Gate.
Ray was the son of Charles Gordon Thompson who was the first school teacher at Cobram, Victoria. Charles was very well regarded in the community so on his untimely death in 1909 the published obituary gave me lots of clues about the Ray's siblings. I was then able to follow the family through to the 1980s but ran out of clues from the electoral rolls. Although, I did have one distinctive name to work with. This name led me to a company in Melbourne so I sent off a speculative email. Very shortly after this I received a reply from Geoff, Ray's great nephew. As it turns out Geoff had recently retired from this company but the thoughtful staff member passed him my email.
Ray's service record makes interesting reading. There are several letters from Ray's mother to Army seeking information about the possibility of Ray's remains being located. The replies must have been heartbreaking for Ray's mother.
Quite a bit of luck went my way with this search. This included prompt replies to Ancestry messages that I sent, which don't always occur, quite distinctive middle names across several generations and a Geoff's thoughtful colleague. The best outcome is that Ray's medals will soon be returned to his family.
The returned medal tally is now 2381. 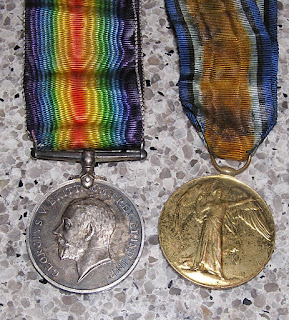 Posted by Lost Medals Australia at 20:08