This search took an unexpected turn when I made an educated guess based on a name I found on Ancestry.
It all started two days ago when I received an email from Andrew M who, for the last 20 years, had in his possession the 1914/15 Star awarded to 2368 Oscar Edward Gill. Andrew had been given the medal after it was found by a friend while metal detecting at a beach.
Finding Oscar was an easy task as well as discovering that his brother 944 Norman Thomas Gill was killed in action. Norman was KIA on 20 September 1917 at Polygon Wood. Norman has no know grave and is commemorated at Menin Gate.
Following WWI, Oscar married Evelyn Thompson and had a son, Norman Herbert Gill. Norman was married to Mary but I couldn't find evidence that they had any children. I then moved to Oscar's siblings but there appeared to be no continuous family line that I could follow. In an effort to find a new clue I went backwards to Oscar's parents. It was then that I found a private family tree on Ancestry which included Oscar's parents and to my surprise the tree owner's name is Neil Gill. This was to much of a coincidence for me so based on that educated guess, I fired of a message to Neil.
As it transpires, Neil runs his own genealogy research business. He has done extensive research on his own family and is related to Oscar. He also found that Norman and Mary did have children but the circumstances meant that the family dispersed over the years.
The timing couldn't be better as the Gill family has a reunion planned for later in 2018. I've connected Andrew and Neil and will leave them to decide the best method of return of this medal to the Gill family and how this might be incorporated in to the reunion.
The returned medal tally is now 2209. 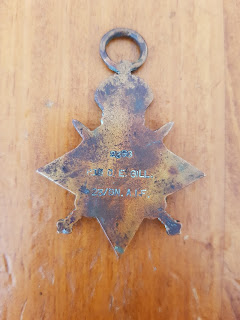 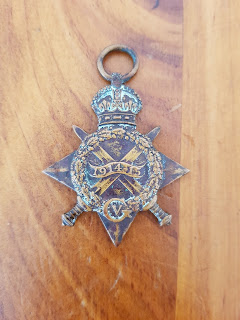 Posted by Lost Medals Australia at 02:44