Yesterday I received an email from Louise asking me to research two WWI medals that she had found in a house she recently move in to. The medals were awarded to VX82640 Lance Bombardier Raymond Charles Piggott.
Ray died in 2003 but I couldn't find a death notice for him. The only clue I had was from the 1972 Electoral Roll which had showed that a Kenneth Robert Piggott lived at the same address as Ray. I assumed that this was a son. For an hour I was frustrated by not being able to narrow done what happened to Kenneth after 1972. All I found was one reference, along with an email address, to a Ken Piggott. Taking yet another punt I fired off an email to Ken and sure enough I had Ray's son.
The returned medal tally is now 2208. 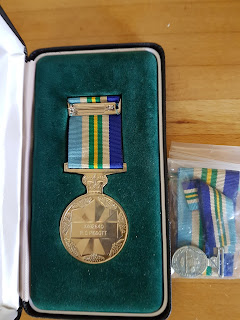 Posted by Lost Medals Australia at 05:50