Each of our successful returns is remarkable in one way or another, however, finalising this one on Anzac Day is extra special.
The search began with a referral via the South Australian Genealogy Facebook page. Janine's father found a WWI British War Medal in an incinerator over 50 years ago and she now wanted it back with the family. The medal was awarded to 3479 William Clarence Luxmoore, 9th Light Horse Regiment. There was some initial confusion in the search as the records alternate between the surname spelling of Luxmore and Luxmoore. William was from a well known South Australian family. He didn't marry and died in 1924 aged just 31. 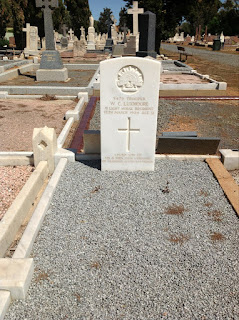 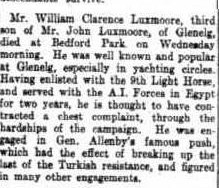 The search then shifted to William's siblings as well as shifting states. It also took a very unexpected turn.
William's parents, a brother and sister moved to the Northern Beaches of Sydney. I found the death notice of William's brother Frederick, however, no children were mentioned. What was interesting was that their sister Winfreda is referred to as Lady Freda Ashton. 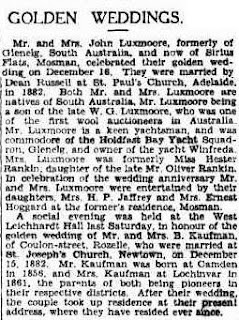 Freda's first husband was married to Ernest Hoggard in 1927. She was widowed in 1955 not having had any children. 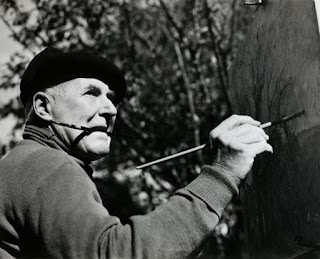 That is not where the story of Lady Freda ends and it is probably as infamous as Will Ashton was famous. In the late 1980s, Sydney was gripped in terror due to the murder of six elderly women. The serial killer was John Glover and his second victim was Lady Freda. Glover was dubbed the Granny Killer.
The Sydney leads ran out so I went back to William's other bother James who lived on Kangaroo Island. South Australian public records are the most difficult to access but I worked out the names of James' daughter and grand daughter. What I couldn't establish was William's great niece's current contact detail. Luckily, through Janine's initial post the great niece made contact and arrangements are being made to return the medal. A fantastic result on Anzac Day.

The returned medal tally is now 2217.

Posted by Lost Medals Australia at 04:18