As soon as I received the WWII medals awarded to 54430 LAC Percy Alexander Cornford I knew something was amiss.
Percy was born in New Zealand in 1899 but by the 1920s he was living in Australia with his wife Mary. Other than a reference to Percy and Mary's divorce in 1926 the records about Percy are pretty thin. All I could really find was that he served in the RAAF during WWII, remarried a lady called Nellie, was living in NZ again in the late '40s then died in Victoria in 1976. I can find no evidence that he he had any children as a result of either marriage. I've been in contact with a relative in NZ and the medals will be sent there shortly.
The other part of this mystery are the medal. Two of the medals are the Australian Service Medal 1939-45 but both are named to Cornford. Duplicate medals were issued if the original was lost but were marked with the letter 'D' or 'R'. Neither ASM has this letter. However, the naming style indicates they were issued in different decades. RAAF impressed naming from the 1950s was in a larger font than Army issued medals which can be seen on Cornford's stars and one ASM. The other ASM has engraved naming which was from the 1970s. I'm sure this was just some administrative mistake but there are still surprises out there.
The returned medal tally is now 2104. 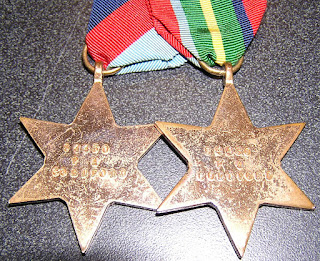 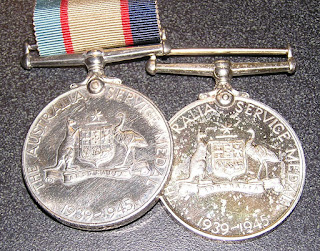 Posted by Lost Medals Australia at 18:22