The lengths that Bill went to to complete this search are in no way reflected in this story.

We sometime forget how easy it is for a family to, over time, fragment. People die, others remarry, children are born, others are adopted, and names change. Most of all people move, not just from suburb to suburb but state to state.
The search to return John’s service medals has been on ongoing story since 1950, when he was killed in a motor-cycle accident, an hour after his sister’s marriage. This was also 5 days before the birth of his first and only child. Out of respect of the families wishes none of the research that identifies any of the people involved will be published.
Other to say that John’s medals are at last, home.

The returned medal tally is now 2111. 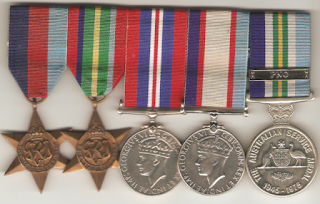 Posted by Lost Medals Australia at 17:33