While a phone call announcing the death of a former Vice-President of an RSL Club can present a challenge, few Secretaries expect a follow call from the family concerned that whilst cleaning out the Vice-President's house, they had found a box full of medals. The obvious question was - what should they do with them?
That was the situation which Chris faced when I first spoke to him and he admitted that after much investigation into finding a next of kin, he had hit a brick wall. Any help would be appreciated.
So began the first search for 3/718848 J.F Lysaght. Fortunately the case containing the medal, came with an undated letter addressed to a J.F.Lysaght of Bundaberg, Qld. While the letter did contain a reference to Sch:15, or Schedule 15 which was its full nomenclature and which Chris’s initial investigation showed that the medal had been issued in 2003, it contained nothing else that would help us identify the original recipient. That is when the search began in earnest. It was from the electoral roll, held at the State Library of Victoria that I found out what the initials J.F. stood for: James Frederick. The electoral rolls also provide me with the rest of James’ family, his mother Mary, his father Harold and his brother Bernard, who had served during WW2.
While it is not always easy to get into town to the Library I took a slightly different approach as I built each stage of James family tree. I went looking for death and funeral notices. And here I was fortunate to find what I believed was James death notice in the Herald Sun of 4/9/2008. This was of great help is that it listed all of James’ children and their wives or husbands. It then became a simple case of aligning each of James’s off spring to their partner.
Google is a great search engine if you know what you are looking for and if you have enough data to start with. In turn I put into the search engine the christian names of each of his sons and their respective spouses. The first combination gave me nothing, the second more hits that I could have searched through in a month of Sundays. It was, however, the third combination that brought up what I was looking for. It was the announcement that Chris (a son) and his wife had opened a bookshop in Perth. That then took me back to an earlier reference where James and Mary, his wife, had operated a book publishing business in Bundaberg, only closing the business in 2008. The closing aligning with the death of James.
My next step was to look up the name and address of the book shop. Alas nothing, but a series of more Google searches threw up the name and address of another bookshop. My next step was to email Chris asking about his possible relationship to James Lysaght.
In less than 30 minutes I got a reply back. Yes he was related, James had been his father.
The penultimate phase of the search was to put both Chris’ in touch with one another and to congratulate Chris (the son) on having a wife with a unique Christian name.
The final phase was to make a cup of coffee, write up this short story, then to start looking at another set of medals that Chris needed help with.

The returned medal tally is now 2106. 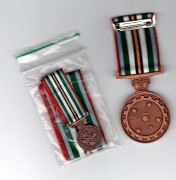 Posted by Lost Medals Australia at 09:26