This one of those different returns that come our way every now and then.
I was recently contacted by Rhett B who had come across a silver tray that was engraved with the name LT HF Stach. The tray had been presented to Hugo Frederick Stach for winning the 440yrd championship at the 14 Infantry Brigade sports carnival that was held in January 1919.
Rhett has asked me why this tray would have been presented and this is the reason. Following the Armistice in November 1918, sports carnivals were organised to fill in the time until transport ships could be arranged to return the troops to Australia. It is likely that this sports activity was held in England.
Hugo was pretty easy to find in the electoral rolls and in the Victorian BDM records. He was the son of Julius and Bridget Stach. The family name was actually Stach Von Goltzheim but it is not unsurprising that they dropped the Von Goltzhiem in 1914. Hugo died in 1929 having never married. I now know that Hugo was gassed during the war and never fully recovered. He had three siblings; Florence who died in 1964 also having not married; another sister, Elfrieda who married Arthur Bates and a brother Vincent who died of wounds on 26 April 1915 at Gallipoli.
This is a summary of several relatives of Hugo's who also served during WWI:
Cousins:
3158 Sergeant Arthur Ralph Kenney, 58th Bn, killed in action, 19 July 1916;
3353 Pte William Harold Kenney, 6th Field Ambulance, died of wounds, 10 October 1915;
Uncles:
3257 Pte Wilfred Rupert Stach, 5th Machine Gun Bn, returned to Australia, 12 November 1916;
Lt Cyril St Michael Stanislaus Power, 60th Bn, returned to Australia, 21 July 1917;
12381 Pte Edward Aloysius Power, 10th Field Ambulance, returned to Australia, 27 May 1919;


It is through Elfrieda and Arthur's family that the tray will soon be sent, specifically to Hugo's nephew Cecil. I am grateful to Lynne and Jennie, who is also related to Hugo, for assisting me put the pieces together.
The returned medal tally is now 2007. 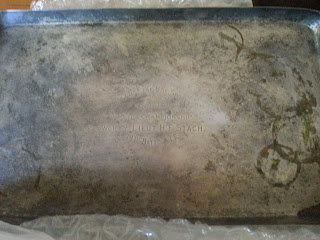 Posted by Lost Medals Australia at 20:44