I'm using a leave period to spend some time revisiting several searches which have proved difficult in the past. A fresh look and a calculated guess has resolved this case.
I received the 1914/15 Star awarded to 929 George Patrick Walton Petroni from Major Neil Leckie who has entrusted medals to me in the past. It was relatively easy to follow George through the electoral rolls but a link to the current generation of his family eluded me.
Following the War, George was a publican all around Australia so there were a few gaps in the records. I found his head stone (pictured below) which gave me the name of his children. This included the name Patricia. Today, I found one reference to a Patricia Patroni on the Victorian BDM and her marriage to J Rowlands. It then became a process of elimination through the electoral rolls and one entry for their son, Peter. This entry also gave be a general location in Victoria in 1980. I found the same name/initial combination in the White Pages for the next suburb and this became the educated guess. Sure enough, when I rang the number I had located George's grandson.
Patricia's husband served in WWII and I've added a picture of his plaque.
The returned medal tally is now 1996. 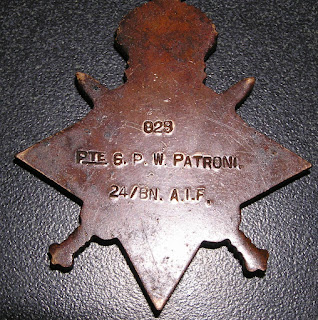 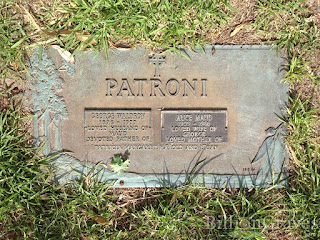 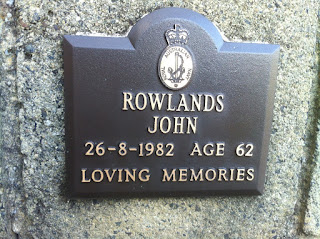 Posted by Lost Medals Australia at 17:04